# Strategic Challenge of the Current Laws 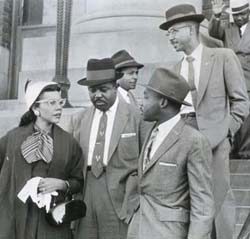 During the time immediately following the beginning of the Montgomery Bus Boycott, Edgar Nixon, Clifford Durr, and Fred Gray began talking to other activists about the need for a lawsuit to be filed in Federal court challenging the local and state laws regarding bus segregation. They began searching past case law hoping to challenge the constitutionality of such laws. As useful as Rosa Parks’ case was in providing them with a valid reason for an uprising in the civil rights movement, it was decided that it would not make ideal case law because of the criminal status of her case. The end result might simply be the dismissal of her case, not the change in law that they hoped for.

As they searched for better case law, they consulted with two attorneys who regularly did work for the NAACP: Robert Carter and Thurgood Marshall. Four cases were chosen, all women having disputes with the Montgomery, Alabama bus system within the previous year. Mary Louise Smith, Claudette Colvin, Aurelia Browder, and Susie McDonald all agreed to take part in a civil suit against the City of Montgomery, Alabama. W.A. Gayle, the mayor of Montgomery was named as the defendant in the case.

The case was filed in U.S. District Court in February of 1956. In the month following the case filing, Dr. Martin Luther King, Jr. and 90 of his followers were arrested and charged with conspiring to conduct a boycott. The ensuing trial was publicized nationwide and helped to bring Dr. King’s crusade for civil rights to the attention of the entire nation. In June of 1956 a three judge panel sent down a ruling. It stated that the bus segregation laws in the city of Montgomery “deny and deprive plaintiffs and other Negro citizens similarly situated of the equal protection of the laws and due process of law secured by the Fourteenth Amendment.” (Browder v. Gayle, 1956). In November of 1956, segregation on buses was ruled unconstitutional by the United States Supreme Court, and was outlawed. It took one month for the ruling to reach the city of Montgomery, Alabama and the Browder Vs. Gayle put an end to racial segregation on public buses, it did not put an end to racial prejudice. Violence once again broke out in the South. Buses were fired on by snipers and the churches and homes of civil rights activists such as Martin Luther King, Jr were attacked and bombed.