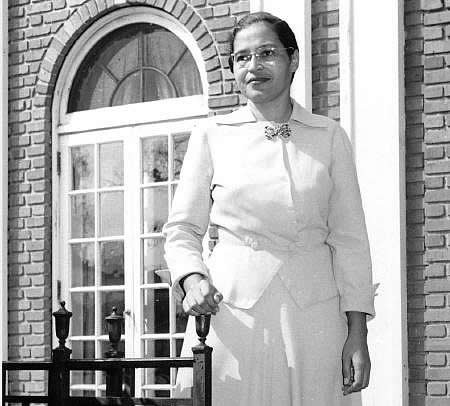 On February 4, 1913, Rosa Louise McCauley was born in Tuskegee, Alabama to parents James McCauley and Leona Edwards. Her father was employed as a carpenter and her mother as a teacher. In her younger years she was sick much of the time, and as a result, was a small child. Her parents eventually separated and her mother took her and her brother and moved to Pine Level, a town adjacent to Montgomery, Alabama. There Rosa spent the rest of her childhood on her grandparents’ farm.

Her childhood in Montgomery helped her to develop strong roots in the African Methodist Episcopal Church. Rosa did not attend a public school until the age of eleven. Before that, she was home schooled by her mother. At age eleven she attended the Industrial School for Girls in Montgomery, where she took various vocational and academic courses. She began laboratory school for her secondary education, but never completed it because she was forced to drop out to care for her ailing grandmother.

Rosa’s childhood was greatly influenced by the Jim Crow laws of the South, which segregated white people from black people in almost every part of their daily lives. This included public restrooms, drinking fountains, education and transportation. For the children attending school, there was busing for the white children to their school, but the black children were required to walk to another school. Public transportation followed this line of segregation except that blacks were allowed on the bus as long as they sat in the back, apart from the whites.

The Jim Crow Laws that segregated blacks from whites were created by white members of the Democratic Party in the Southern states between 1876 and 1963. They created many barriers for black voters and had several regulations including banning interracial marriage and providing racially segregated school systems. This continued existence of this policy created and continued great political tension between the Northern and Southern states, both Democratic and Republican Parties, on the issues of black rights.

This struggle brought to light a landmark piece of legislation, the Civil Rights Act of 1964. President John F. Kennedy met with the Republican leaders on June 11, 1963 prior to his television address that night to discuss the legislation. On June 13, Everett McKinley Dirksen, Senate Minority Leader, and Mike Mansfield, Senate Majority Leader, both voiced support for the president’s bill except for provisions guaranteeing equal access to places of public accommodations. This bill was reported out of the Judiciary Committee in November 1963, and referred to the Rules Committee, chaired by Howard W. Smith, an avid segregationist and Democrat from Virginia, indicated his intention to keep the bill bottled up indefinitely.

In late November 1963 the shocking assassination of John F. Kennedy changed the entire political situation. The new president, Lyndon Johnson, used his experience in legislative politics and the “bully pulpit” he wielded as president in support of the bill. President Johnson signed the bill into law on July 2, 1964.

The passage of this important legislation then led to the famous Voting Rights Act of 1965, signed into law by Lyndon B. Johnson on August 6, 1965.

The two numbers in each line of this list refer to the number of representatives voting in favor and against the act, respectively.

Democrats: 49–17 (four Southern Democrats voted in favor: Albert Gore, Sr., Ross Bass, George Smathers and Ralph Yarborough). Republicans: 30–1 (the lone nay was Strom Thurmond; John Tower who did not vote was paired as a nay vote with Eugene McCarthy who would have voted in favor.) House: 328–74

In her autobiography, Rosa recalls her grandfather standing at the front door of the farmhouse with a loaded shotgun in his hand while he watched as the Ku Klux Klan marched down their street. As frightening as this was to her as a little girl, it taught her much about the very real prejudices against blacks in American culture.

On the other hand, she also tells of the many white people who were kind to her and her family as she grew up. Although aware of the prejudices of most of the white people in the South, she refused to allow it to taint her attitude towards the goodness of mankind. She attributes much of this to her strong faith in God and reliance on her church in times of tribulation.

In 1932 Rosa Louis McCauley became Mrs. Raymond Parks in a small ceremony performed at her mother’s home in Montgomery, Alabama. Her husband, a Montgomery barber, encouraged Rosa to finish her high school classes and get her high school diploma, which she successfully accomplished in 1933. She also managed to register to vote, after only three tries.

Rosa joined her husband in their fight to raise money for the defense of the “Scottsboro Boys”, a group of black men who had been falsely accused of raping two white women. After many years of influence by her husband, who was already a member, Rosa joined the NAACP in 1943 and was made the secretary to its president, Edgar Nixon. Rosa’s volunteer position for the NAACP lasted for 13 years. In 1944, Rosa took a job working on the Maxwell Air Force Base. The air force base was considered a federally owned area and segregation was not allowed. This was Rosa’s first taste of a life of equality and was a turning point in her attitude towards civil rights. In Rosa’s own words: “You might just say Maxwell opened my eyes up.”