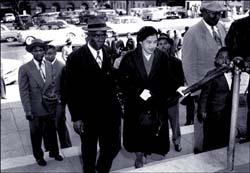 24 hours after her arrest, Rosa Parks was bailed out of jail by Edgar Nixon, president of the NAACP and her friend, and long time employer, Clifford Durr. Nixon spent the better part of that night conferring with a professor named Jo Ann Robinson from the Alabama State College. Jo Ann Robinson was a member of the Womens Political Council and quickly generated over 35,000 copies of a flyer announcing a boycott of the buses. This Rosa Parks bus boycott became a key strategic piece to turning the opinion of the public bus companies.

The NAACP, and particularly its president, Edgar Nixon backed both Parks and the MIA in their plans to stage a boycott. Nixon felt that they had finally found a subject worthy of being in the middle of a civil rights uprising. Parks was a good, upstanding, married, and employed citizen who was politically, yet quietly, active in her community.

Rosa was quickly brought to trial on the aforementioned charges, along with one for disorderly conduct. The trial was short, lasting only one half of an hour and she was found guilty on all charges. Her total fines and court costs were $14. Rosa chose to appeal the conviction, effectively challenging the constitutionality of the segregation laws. In an interview in 1992, Parks stated that she did not intend to be disorderly or to get arrested. She was just tired of the oppression that giving in to segregation demands seemed to encourage.

Two days after Rosa’s arrest, in local church services, members of the black community were notified of the boycott. An ad in The Montgomery Advertiser also helped to spread the word about the boycott. A unanimous agreement was made that black people would boycott the buses until fair seating was arranged, changes were made to the way blacks were treated on the bus, and some black drivers were hired. This tactic proved to be highly effective because, at that time, statistics showed that blacks made up 75 percent of the buses riders.

The immediate result of the one-day long bus boycott was the development of the Montgomery Improvement Association on Monday, December 5th, 1955. The MIA was developed specifically to lead ongoing boycott efforts. The president of the new association turned out to be a little known young Baptist minister named Dr. Martin Luther King, Jr. King had an eloquent way of making an appeal that could garner both American patriotism and Christian brotherhood at the same time. When the Southern Christian Leadership Conference was developed in 1957, Dr. King also became president of it in the hopes that the SCLC could aid the NAACP by encouraging blacks and whites alike to find non-violent ways to protest the segregation issues. The SCLC helped to organize demonstrations, boycotts and marches. However, the white response continued to be violent and was the main reason that the government was finally forced to confront and deal with the segregation issues in the South.

The 35,000 flyers announcing the bus boycott were completely distributed by the day of Parks’ trial and all blacks were asked to remain out of any form of bus transportation, including to and from school for the day. The support turned out to be incredible and the boycott was extended. During the boycott, a carpool made up of 300 cars that were volunteered was set up. A downtown parking lot was created for the carpool automobiles to meet at and transport people to different parts of town. The police reacted very quickly to this situation by arresting those who were waiting for rides, accusing them of loitering. Drivers were harassed with constant ticketing, and drivers and passengers both were arrested on charges of operating and riding in cars that were overloaded. The boycott lasted for a total of 381 days.

Losing 75 percent of their riders turned out to be very detrimental to the finances of the public bus companies and twelve and a half months later, the boycott was finally over. New laws went into place that ended segregation on public buses.

These new laws brought angry outcries from proponents of segregation. Many arsons and bombings were blamed on those who did not agree with the new laws. Still, the Montgomery Bus Boycott is considered to be one of the most successful uprisings against racial segregation. Many more rebellions followed and it began Dr. Martin Luther King Jr‘s rise to the battlefront of the war for Civil Rights.