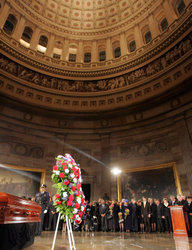 In 2004, Rosa was diagnosed with progressive dementia and died the following year on October 24, 2005. Three days after Rosa’s death, all of the city buses in Montgomery and Detroit reserved their front seats with black ribbons in her honor, and remained this way until Rosa was put into her final resting place. The journey to the cemetery was a long one, one that recapped everything she stood for and believed in her whole life.

On October 29, 2005 her body was flown back to Montgomery and taken to St. Paul African Methodist Episcopal Church by a horse drawn hearse. She lay in repose at the church until the following morning when a memorial service was held in her honor. Secretary of State Condoleezza Rice spoke at the service. In this speech was an important insight, when Rice stated that her own job is credited to Rosa’s efforts in helping to shape a path to success for other inspirational black leaders.

That same evening, Rosa’s body was transported to Washington, D.C. where a bus that was similar to the one she made her famous stand in transported her to the U.S. Capitol Rotunda. There she lay in honor, and was viewed by more than 50,000 people, until the memorial service at St. Paul AME in Washington, D.C. on October 31, 2005.

After the memorial service in Washington, D.C., she was taken back to Detroit to the Charles H. Wright Museum of African American History where she lay in repose for two days.

On Wednesday, November 2, 2005, a funeral service was held for Rosa at the Greater Grace Temple Church in Detroit, Michigan. The service lasted for over seven hours, after the casket was taken by horse drawn hearse to the cemetery. An honor guard from the Michigan National Guard laid a flag over the casket before it was transported and presented it to Rosa’s niece at the cemetery. Along the route of the funeral procession, thousands of people stood in honor of Rosa and released white balloons as the procession went by.

The day of Rosa’s funeral procession, President George W. Bush ordered all flags in the Nation’s Capitol and all United States public areas, both continental and abroad, to be flown at half mast.

Great honor was shown to Rosa Parks by allowing her body to lie in repose in so many prestigious places, giving many people the opportunity to pay their respects to this woman who had done so much to change the future of the American people. Add to this the shear number of people who arrived at each memorial service and viewing and the thousands of people on the procession route and you get a testimony to the many lives that Rosa Parks touched during her nine decades on earth.